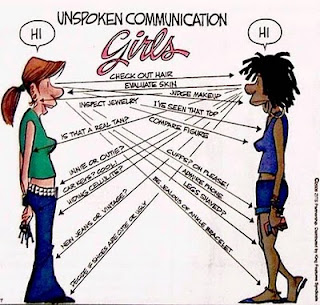 "The loneliest woman in the world is a woman without a close woman friend." George Santayana

I am a real cheerleader for Girl Power. And while I am awed and grateful to those who are fighting the fight in Corporate America, politics, and other areas sporting the notorious glass ceilings--my advocacy efforts have been in the area of personal empowerment. I've made it my business to help women find their true and authentic selves, and live joyfully and sensually empowered by the knowledge that being themselves can never be wrong.

That said, while I've been on a short break between the last book and the next, I've been watching more television than usual, and based on the current television fare, ladies, we've taken a huge step backwards. According to the ratings, for far too many of us "must see TV" now revolves around bad behavior by and between women.

The teen set has Oxygen's Bad Girls, MTV's Teen Moms, and of course The Jersey Shore, where competition, mean spirited behavior, and blatant disrespect makes you rich and famous. We grown women have the Housewives from all over the country, in all of their bitchy, backstabbing, two-faced glory. The corporate set has Celebrity Apprentice, with Star Jones and her irritatingly nasty ways. And even the politicos have Sarah Palin, who is infecting our political discourse by pitting the Mama Grizzlies against the Intellectual Elites in all out class warfare.

These shows, and a host of others like them, have made it cool to be a judgmental, critical bitch, especially if your particular 'insights' and commentary are delivered with biting sarcasm and personal disdain.

The problem with our popular culture being polluted by the mean girls and their bad behavior, is that sadly we are actually bonding over, and worse, emulating this stuff. Petty gossip and harsh judgment has become a valid form of social interaction. And as Snooki and NeNe prove, at the very least, it gets you attention, and if you're really lucky, it can also bring you fame and fortune.

But it's also costing us our sisterhood. In the name of entertainment, we are losing our compassion for each other, which is a damn shame because as Mother Teresa said, "If you judge people, you have no time to love them." And as we all know, if you don't love, you don't really live.

The truth be told: Hatin' only stunts your growth. Know that sister love is no different than partner love in that like energy attracts like energy. The quality of friendship in your life is directly related to the quality of girl friend you are.

So beware of the woman who doesn't like other women. We all know one or two, who says, "I don't know why women don't like me." Or "I just don't seem to get along with women." These women aren't going to help you thrive, but instead will vampire your positive energy and create more drama in your life. And if you find that you're the mean girl, start seeing yourself in other women. You'll find your own strengths in the women you admire (or envy), because they act as a mirror, reflecting back at you the same hidden assets that you possess but have yet to acknowledge and let surface.

What do you think?
Posted by Lori Bryant-Woolridge at 4:35 PM 2 comments: