250 Years of Seduction in Fashion 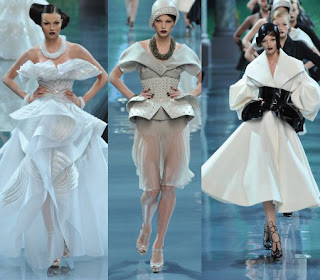 The Museum at the Fashion Institute of Technology presents "Seduction," the first chronological survey to explore 250 years of sexuality in fashion.

Seduction is traditionally defined as an act of temptation and enticement, often sexual in nature. Throughout history, men and women have utilized seductive clothing to enhance physical attractiveness, as well as to convey a sense of power and social status. The Museum at FIT presents "Seduction," the first chronological survey to explore 250 years of sexuality in fashion.

"The proximity of clothing to the body is inherently sensual, conveyed through the strategic interplay of exposure and concealment," said Colleen Hill, curator of "Seduction."

"Seduction" is on view through June 16, 2009 in the Fashion and Textile History Gallery at The Museum at FIT. Admission is free.
Posted by Lori Bryant-Woolridge at 2:45 PM No comments:

How do you define sex?

If you’re like most people, your definition probably includes begins and ends with the words, ‘intercourse’ and ‘orgasm.’ Well, ladies, I think it’s time we had a discussion about redefining sex beyond intercourse.

The clinical definition of sex is the one that most of us use to define our own ideas on what sex is. Clinically defined ‘intercourse’ is the penetration of a vagina with a penis, culminating with male ejaculation. This is very different from ‘sex,’ which includes all sexual techniques, big and small, designed to create and enhance intimacy and physical pleasure, whether or not orgasm is achieved.

We women are so caught up in the erroneous perception that our role in the bedroom is that of sexual servant and partner pleaser that we have given up not only consideration for our own pleasure but also the incredible POWER that we possess but rarely, if ever, tap into.

This is an important lesson for women to learn from the gitgo because as life progresses and more life events occur i.e. marriage, children, menopause, and god-forbid, illness, managing your (and his) sexual desires and expectations becomes increasingly important.

What do you think?
Posted by Lori Bryant-Woolridge at 3:08 PM 2 comments: 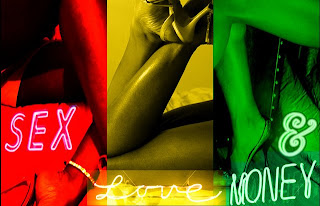 Here are your poll results for December. The question was: All I want for Christmas is...

I love you, my lovely, lusty ladies! Half of you said you wanted more sex in your life while nearly the same said you want it all.

While our nation and the world is in the midst of this major correction and busy trying to find its center, you should be taking this opportunity to prepare yourself for the life you want. You can line up and be part of the B & M chorus (that's bitch and moan) or you can be part of the Do and Be crowd. Take a guess which group is going to achieve results faster?

How do I get started, you ask? First sit down and interview yourself about what you love and hate about your life as it is right now. Make two lists, one of all the things you truly want to eliminate in your life this year. All the negative, toxic things that are keeping you from being the magnificent woman you are meant to be. Be honest but gentle with yourself. Read it out loud and then burn the list as a sign of your unburdening yourself of these things.

Make a second list of all the great things you love about who you are and what you do. Use this list to build upon the positive changes you want to create during 2009.

Then take the rest of this month to hone in on your top priorities for change in your life this year. Put them in order of importance to you and under each, list just three ways you can start NOW to make these things come to fruition. Three things. They don't have to be huge. They can be small as long as they move you forward. So if you want to bring more love (or sex or money or truth) in your life, list three ways that you can begin that process. Work on one priority at a time or all at once, depending on your ability to multitask.

Here are a few of my favorite saying that you can adopt to spur you on: Where your mind goes your butt follows. Change your attitude; change your life. Wishing doesn't make it so. Seek Balance, Find Happiness.

What do you think?
Posted by Lori Bryant-Woolridge at 1:58 PM No comments:

Snow Angels and Other Gifts of Innocence 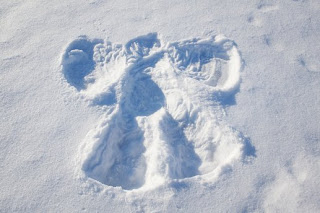 Happy 2009! I've finally sat down (okay sobered up) long enough to reflect a bit on Christmas past.

I don't know about you, but I was happy as hell to see 2008 head on out the door (with the imprint of my size 8 stiletto planted firmly on its behind). What a year! Yes, we elected President-elect Obama but that joy was swiftly replaced by the reality of a deep economic recession that touches all of us--no matter how high or low on the hog we're accustomed to living. By Thanksgiving we were all left feeling scared, uncertain, vulnerable and just a little bit helpless.

And then the holiday season kicked into high gear and with it the need to give our families (particularly our kids) the kind of comfort and joy they are used to feeling around this season, while now, we broke-ass Santas were feeling a lot less jolly.

But, as they say, with every cloud there is a silver lining. I decided to let go and let God but also loose and let laughter reign. Once I stopped worrying about the fact that I couldn't surround myself or family with the high pricedthings this Christmas, I had this major 'ah ha' moment. A lot of expensive stuff may not be possible but I could surround them with pleasure and that's when I decided to give myself and my family the gift of returned innocence.

First, I made the house look and smell as joyous as possible. Fresh pointsetta plants, cinnamon scented pine cones and candles, a fresh pine tree decorated with treasured ornaments and colorful lights (wasn't in the mood for serene, classic white lights this year). Candlelight sparkled everywhere, every night. Music filled the house and though there was more room under the tree than in previous years, Christmas was alive and well in the Woolridge household.

Without all the shopping to do, we rediscovered how amazing the season could be. We cooked for family and friends--everything from gumbo to pork tenderloin with red onion jam. I also took myself into Manhattan for the sole purpose of walking, watching, window shopping and really enjoying the holiday ambiance--something after all of these years of living just outside of the city I rarely did. I didn't step foot into one store but instead witnessed a true wonderland. The majestic tree and colorful ice skaters in Rockerfeller Center, the decorated shop windows, the horse drawn buggies and the amazed and happy faces of tourists who picked a great time to witness New York City for the first time. The herds of smiling face blocking the streets as the Radio City Hall Christmas show let out. I sat in St. Patrick's Cathedral and prayed and meditated for a better year for all of us and was gifted by a chorus of angels rehearsing for Christmas mass.

It was fabulous, soul-stirring, smile-rendering and but for train fare--free.

And then it snowed. My world was covered in white, glistening snow just as Christmas time should be. And leaving behind all of their video games, ipods, iphones, and on- line social sites, my nearly grown kids went out and played in the snow. Snowball fights ensued, snow angels took flight and hot chocolate awaited them.

Santa regifted us with innocence this Christmas. It kind of sounds corny as I write this all down but to let me know that 2009 is going to be all right after all. It also reminds me that sensual living usurps material living any and every day.

What do you think?
Posted by Lori Bryant-Woolridge at 12:48 PM 1 comment: